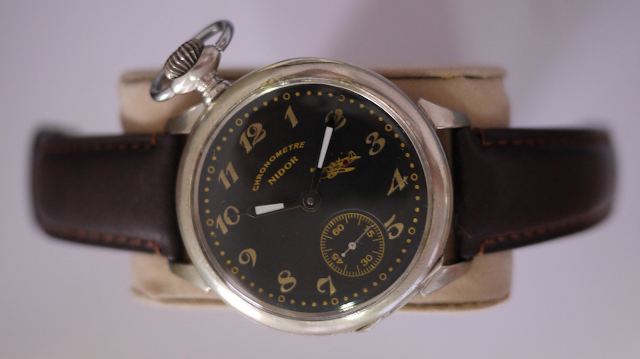 I have another conversion piece dated from the 40's/50's. However I suspect this may be a war-era pieced-together frankestein watch.

It has 2 different known watch names on it. The dial and (I suspect) the solid silver case came from Chronometre Nidor (a known brand under Buser Freres & Co). The movement has Pandow Watch Co Suisse on it.

Chronometre Nidor came from the studios of Manufacture d'Horlogerie Buser Freres & Co., founded in 1916. Their speciality was pocket watches.


In time, after the first round of consolidation within the Swiss watch industry, Mssrs Buser Freres & Co joined the "Manufactures d'Horlogerie Suisses Reunies S.A." (M.S.R. Union of Swiss Watchmakers), which was a union with 3 other watch making houses; The Phoenix Watch Co, Thommen SA, and the Vulcain & Studio watch shops. The grouping which started in the early 60's intended to consolidate their expertise and market their products as a group which rationalize their production and marketing forces.

The dial was refinished marking the era it was originally born into. Large pocket watches were favoured to be converted as flight watches as they were large enough to be worn over the pilots' flight jacket's sleeve. Pocket watches also have large crowns, which was convenient as pilots during those time had gloves on. 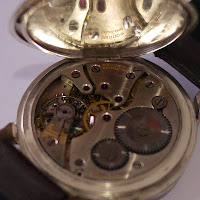 The movement came from a lesser known Swiss Manufacture; the Pandow Watch Co. The United States Horological Trademark Index (book written by Kurtis Meyers) showed that the company had registered its trademark for use in the United States since 1923.


The movement is a strong beating 17 Jeweled piece. The movement generates a strong audible tick-tock which you would not find in timepieces these days.

The watch is housed in a 45mm .800 proof double-lid solid silver case (57mm with the crown). The silver alone carries a third of its value.

I suspect that this watch was put together during the war from parts that were available during that time.

This was not uncommon during those trying times.


The watch comes with a new 22mm leather strap.

The above unique timepiece is priced at RM950 (Malaysian shipping address). Another RM150 for EMS/DHL shipping & handling fee is applicable for non-Malaysian buyers. Box and papers are not supplied. Check our buying guide before purchase.


Posted by Khairudin Jalaludin at 21:12